Paris Attacks a Reminder to Be Prepared

World Record Hurricane Patricia A Reminder to Be Prepared

Well, this week the strongest Pacific hurricane ever made landfall in southwest Mexico and the results are in just time for another newsletter post. This one will be short because I am feeling a little grungy and stopped up so I need to get some Nyquil and hit the sheets.

So…a few days ago the big news story was Hurricane Patricia. It was being billed as the strongest Pacific hurricane in recorded history. OK, actually most of the headlines just said the strongest hurricane ever. I guess it sounded way more dramatic without the qualifiers. And apparently it’s only called a hurricane depending on where it occurs and I think I heard there may have been stronger storms that were technically classified as typhoons or cyclones. Bottom line, Hurricane Patricia had sustained winds over 200 mph and record breaking low pressures. It was a big deal whatever you call it and it was headed for the coast of Mexico. Maybe right for Puerta Vallarta, which I think was the preferred prize location for the Dating Game TV show many years ago.

The good news is the bachelors and bachelorettes were not washed to sea. The winds were down to about 165 MPH when the hurricane made landfall, still significant but not as bad as it could have been. There was some flooding but not the catastrophic damage that could have occurred had the storm maintained intensity and hit a major population center.

The kicker is that the hurricane, now really just a tropical storm, pushed across Mexico and dumped a lot of rain on Texas. Some areas got as much as a foot of rain in a day, causing flash flooding and general discomfort.

I have to admit I didn’t follow the story too closely. Not only do I live near Atlanta, Georgia- which is not exactly at risk from many hurricanes- but I was camping with the Boy Scouts this weekend and had other things to attend to. But it did remind me of the importance of the Scout Motto, which I end every video with. Be Prepared.

Even if the high winds didn’t blow everything away and  the storm surge didn’t wash it away, just “simple flooding” can put you in the hurt locker fast if you aren’t prepared. We actually had what they called a “500 year flood” in my county a few years ago and it was a real eye opener to me about the importance of self reliance and preparation. When the water treatment facilities get flooded and suddenly that faucet we all take for granted no longer dispenses fresh, safe water you had better have a Plan B or you’re gonna get thirsty fast.

Not to mention power outages, which are not too bad in the summer (except for spoiled food in the fridge) but can be life threatening in really cold weather. Even if you have a gas furnace, most of us have electric blowers so no electricity means no heat.

I mention all that just to point out the value of events like Hurricane Patricia as a reminder that “prepping” doesn’t have to mean you are getting ready for societal breakdown or the end of the world as we know it. There are plenty of comparatively boring, mundane scenarios that are probably much more likely to trigger a need to be prepared with water, food, backup power, etc. I really think the Boy Scouts are on to something.

Speaking of Boy Scouts, I have been doing a lot of thinking lately about the Boy Scouts and some of my thoughts are going to wind up in some videos soon. One of the things responsible for that is a comment I received from a Boy Scout a little while back, another is one of my sons just earned his Eagle Scout rank and there are a few more reasons I’ll talk about in whatever videos I wind up making.

Speaking of videos, as just a quick teaser about what else is coming up, be watching for a dedicated playlist of gift ideas for the Christmas season. I have several folks on my gift list that are just hard to figure out what to get. I’m sure you have some folks like that on yours. So I decided to find some stuff in a wide range of prices that will make good gifts for folks who like to do the kinds of things we do. I may put together some “10 gifts under $x” videos or just do individual videos or a mix of both. I’ll just have to see how  it works out. I hope it will be helpful.

Finally, we had the last Thrunite Thursday giveaway this week (at least for a while). Hats off to Thrunite for partnering with Survival On Purpose to reward the folks like you who support the channel with your views and Amazon purchases. We didn’t make a big noise about the weekly giveaways and, although that would have gotten them a lot more exposure, Thrunite was cool with that. I didn’t even put the word ‘giveaway’ in the title except for the final one. I still have a few flashlights to test and review so the Thrunite Thursdays will continue for a while, just without the giveaways for now.

By the way, congratulations to Abdelrahman in Qatar, winner of the Thrunite TN12 (2016).

OK, I guess I’ll wrap it up now. I need to magically transform this post into an email newsletter and get myself in bed. I appreciate your support. It would be cool if you would check out this weeks offer from my sponsor this month: Survival Frog. This one is a cool Paracord Survival Grenade with a surprisingly useful assortment of survival gear in a very handy, compact package. And at a very low price too. You can CLICK HERE or on the image to check it out. 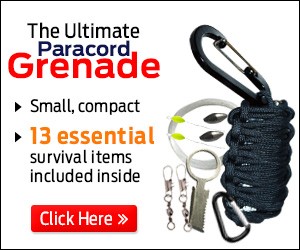